The idea of having a long-term retreat has been wandering through my mind about for about half a year. Previous individual retreat lasted for two weeks, and it felt like I could take much more if lasted longer. I wanted to contact the places that are close to natural origins of our tradition. The general location of the place was already chosen. As far as I’ve never been to Chine before – it was going to be an interesting adventure. Some sightseeing included on our way back and there, but intensive practice for about four weeks was the number one goal. I’ve spoken with Vitaliy about all the mountains he has been, and thought about the least populated, but with opportunity to get a bed and some food there. So it was going to be Tyanju mountains.

My chief changed his face to surprised from suspicious, making fun of me, looking at one month vacation request, but still signed as soon as it was already agreed. Everything was going easy and natural and it was a good thing for a start. We’ve decided to stay in China from the end of March till the end of April. It should be warm enough for comfortable practice outdoors and on the other side we would be at home before the all-Chinese celebration of the Mays holidays starts. Having the tickets ordered and papers passed in January, all we had to do is wait. 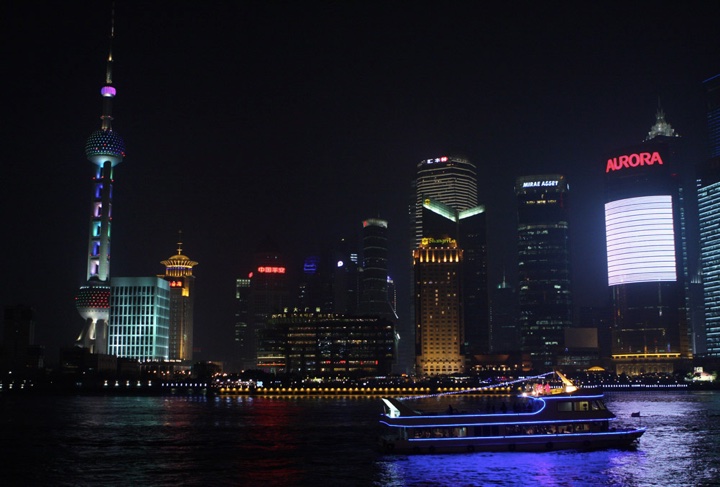 We didn’t sense as Shanghai swallowed us. The same way as many others. Foreigners pay more attention in our capital maybe. Shanghai is the city of the future, according to Chinese interpretation. We were about to find out – what this future gonna be.

Took an electro-magnetic railway train to the center. 50 kilometers in 8 minutes, instead of half an hour by metro. Maximum speed 450km/h. Train accelerates to the maximum and just after that start to break. Like a sport bike in a city or even closer to a plane landing. Every china man should make a photo of the speed indicator, they behave that way. Either did I. 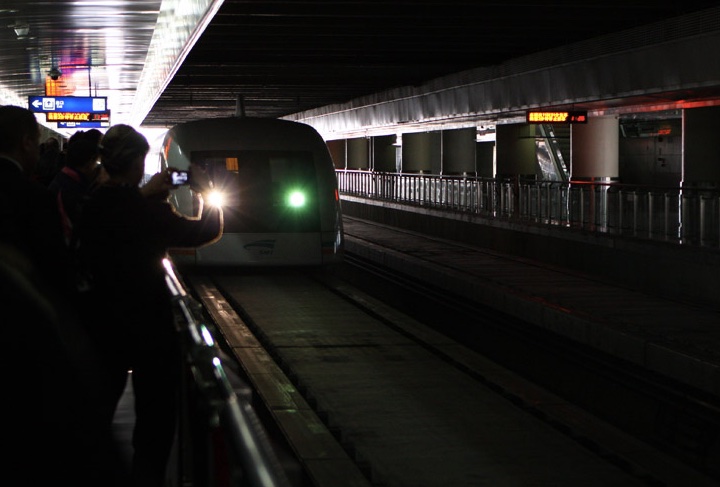 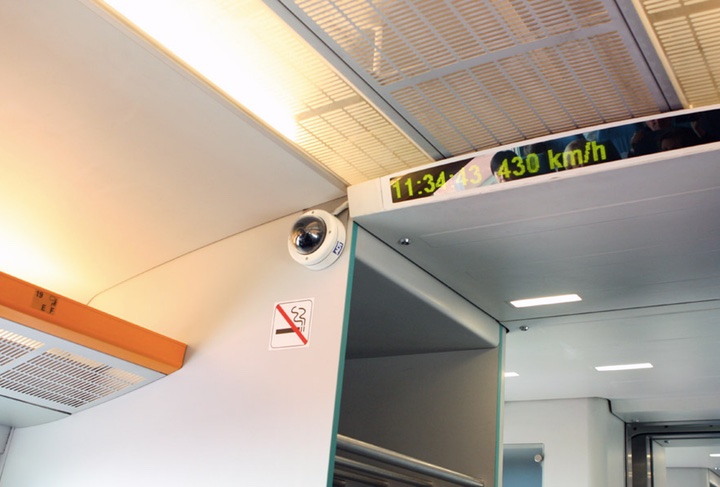 We moved to the metro and followed to our hotel. Metro stations are very functional, everything is signed in Chinese an English (especially the line to the international airport), light-emitting diode running letters and schemes with “you are here” indications in the trains. We’ve started to guess about the station names at the end of our trip. In English, for sure 🙂

All the trains make full stop, make some sound and open the doors only after it. Nobody’s jumping out of the train while it is still moving a little and the doors are already open, like I usually do.

Passages at the cross-stations are not long. They are very long. I suppose it helps to spread the human flow and prevent traffic jams. It is hard to imagine what to do if the one occurs, too many people wandering around. And all was designed to prevent the situation. Metro tickets can be bought at the automatic ticket-selling stations. Choose English, choose station – no problem.

People are dressed without pretension but rather good. Many of them are reading from the mobile phones and various other mobile devices. 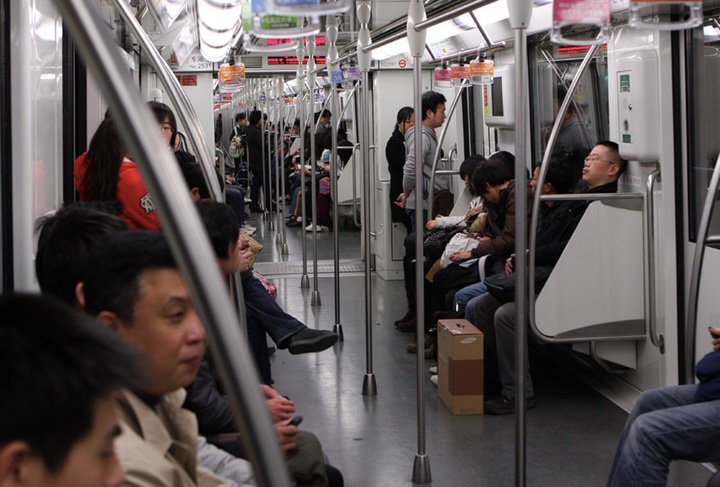 We were very surprised after going out at the destination point. Not much signs of the megalopolis: not much high buildings, no traffic jams, no bustle – just a lot of bikes and scooters (but not actually that much as I expected to see) – in two stages from the main street!

One half of all the two- and three-wheelers is running an electrical engine, and has an outlet socket, like a computer. Funny.

Many two- or three-storied buildings (still close to the center of Shanghai I mean). Rather unusual for us, where all the buildings of non-historical value were substituted by a new ones.

No signs of rubbish, wrappings at the streets, while nearly every third-forth china citizen is dropping them regularly. Even if the trashcans are located at 3-meter distance from each other on every street.  Which illustrates the thesis: It is clean at the places, where the cleaning is regularly held, not necessary in the places where nobody drops rubbish.

Rule of the Road

As it later proved to be the same in the other cities – the citation with the Rule of the Road is rather strange. As well as it is all other Asia, except Japan, maybe. The Rule does exist and is hypothetically followed, but… scooter and bicycle riders behave themselves like the Rule has nothing to do neither with them personally nor with their driving style. Car drivers look like they are following it more strictly but the feeling of the moment or the current mood has higher privilege than the Rule. And they actually have fewer incidents than we do. That’s one of the greatest mysteries of Asia I don’t get.

What would you expect while crossing the road under the patronage of green light? All the traffic stops, pedestrians walking freely across the road at dedicated areas? Nah!

Cars really slow down and stop, but scooters bicycles and bikes don’t look to mention the road situation change. They just continue to move without any speed loss. If you somehow happen to appear on the way – they’ll try to move around smoothly with the same speed. Good news is that speed is usually less then 50 km, even at the perfect roads of Shanghai.

Electro-scooters silently outrunning you from the back at walking tracks, at nighttime – how could it be described? They feel like ninjas that you have no chance to run from.

But then after a short period of time – you get used to it. Your local experience and observation proves you that it’s ok. It has been the same way before you arrived and it will stay after you leave. It’s specific, but maybe even less dangerous than in the places where people follow the Rule of the Road much more strictly.

There is less aggression, less bustle in people behavior. Maybe it’s one of the reasons for the fewer road incidents? 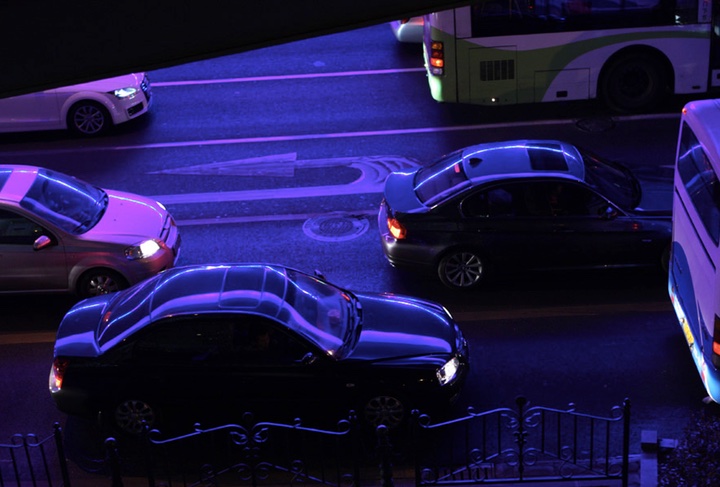 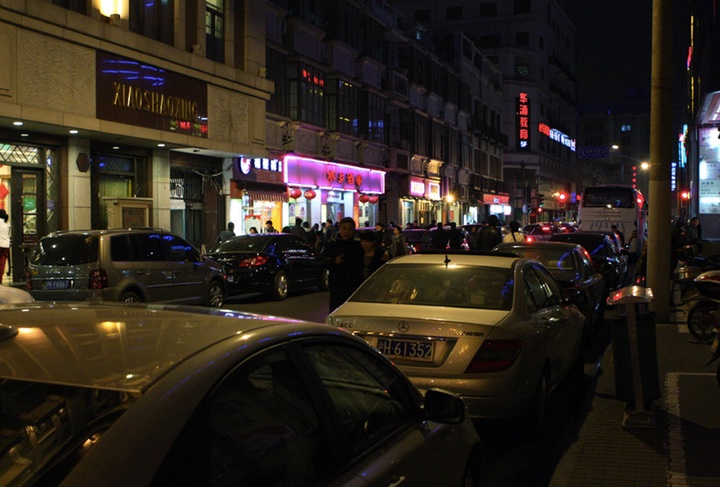 There is plenty of European advertisement and big-boards with European actors, models, singers. George Cloony poster hanging all along the 30-storied building or higher. We’ve mentioned several models flying the same plane that we did – for advertisement photoset, for sure.

After having a shower left our belongings at the hotel and moved to explore the new land.

All the first floors of the side streets were used for selling various goods. Each place is has a counter 2-3 meters long which is close to another counter – and that’s how street looks at the daytime. We had a food market not far from our hotel and that was an encounter with another civilization. Wandering between Chinese-people-know-what and Chinese-people-eat-only things we discovered fresh toads, fish, birds and many fresh fruits that we immediately tested. It’s not normally a fresh strawberry season at the end of March at our latitude.

I was surprised that product’s weight is measured in half-kilos, while looking at the amount of food local people eat – it should be 2 kilos standard 🙂

Discovering of the place to have a complex dinner, appeared to be kind of problem, on the other side. A lot of bakery, authentic fast-food joints (dish name – Chinese hieroglyphs, description – Chinese hieroglyphs, price – Chinese hieroglyphs. No pictures, no English signs – no chance), luxurious restaurants – not interested, MacDonalds – I’d pass. The selection of tea at local places did not inspire as well. Packets from the stool at the crossroads (yes it was exactly a tea!)  or teashops with double price, just because they are “cool shops”.

We’ve bought speedy train tickets to Hefei at the railway station for the next day morning and continued wandering along the city streets. In spite of having all the necessary train timetables printed (both in English and Chinese) buying train tickets – is always such a performance in China.

At 5 PM (local time) we finally discovered the place to eat with color food pictures, Arabian digits and Chinese food. (Not that we were that hungry or worried about the fact of wandering around after eating just fruits. It happened so, so let it be.) We ordered 3 dishes for 2 and hardly managed to eat it all – too much food, really. Normally, Chinese family of 10-12 persons orders several dishes for all and everyone takes what he likes. Moved out satisfied and replete for a tea-quest to complete.

Chinese (students?) girl and guy appeared on our path, and asked to talk a little to help them practice in English. Word after another it appeared that they were going to a tea ceremony, and offered to go with them. Feeling skeptical about that proposition – still decided to look where this path is gonna lead. Did not find the place we came to interesting enough for buying, or even staying and drinking tea. Even for free. Just 7 sorts of tea and nothing of those we wanted. Didn’t ask about the price, just left. It appeared to be the traditional Chinese entertainment: “Make tourist pay the triple price”. The prices we already knew, either way, before even moving to China. The preparations made to attract tourists by this shop looked very strange in comparison with assortment of goods they had. What did they actually expect?

Finally, lady-luck shined over our a little bit tired souls. A small shop with about hundred species, teapots caps and other staff welcomed us. Comfortable place, good people, acceptable prices. We’ve held a tasting for hour and a half, up to a total satisfaction and bought more than 3 kilos for two with a good discount, and were supported by the owners with gratitude, understanding and  “come-back-soon” propositions. Tired but happy – we followed the street of the neon-lit city in the direction of our base. 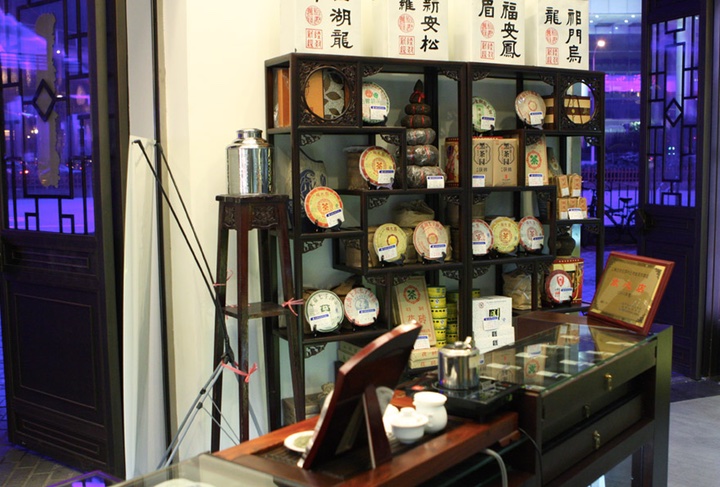 Talking about photo – daily weather appeared to be cloudy and a long flight did not inspire to make photos “me and that skyscraper”, but “Only after dark” city flourished with all possible and impossible neon colors. I don’t know whether a general lightning scheme ever existed, but it should have been, cause various objects lightning did not try overcome one another with color or brightness, everything was put together in kind of a harmony. Shangai lightning scheme honored my respect. 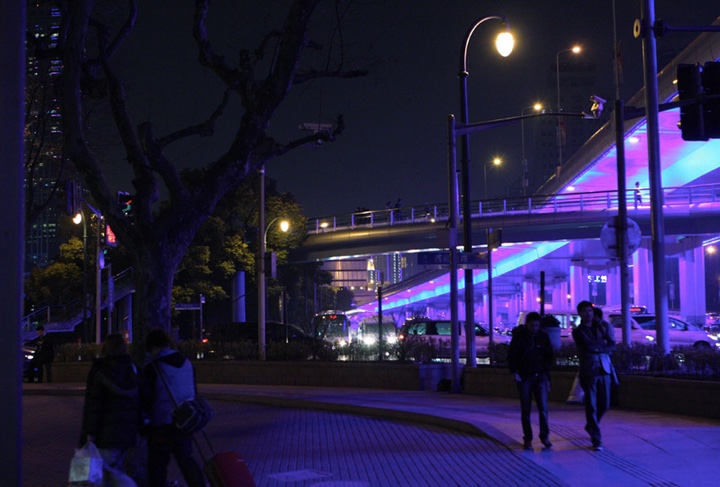 The last interesting observation of the day was about drunk and homeless people. Or should I say better, about their absence. Noticed several people who were peacefully sitting on benches, after taking some alcohol, I guess. But so quiet people. No shouting, no aggression. Homeless people appear only after dark, spread their blankets under the bridges and go to sleep. In the morning they are not here. Should I say as well, that when we returned on feet to our hotel at 11 PM – it felt like it was absolutely secure – walking at night in a foreign city with a population above 20 million.